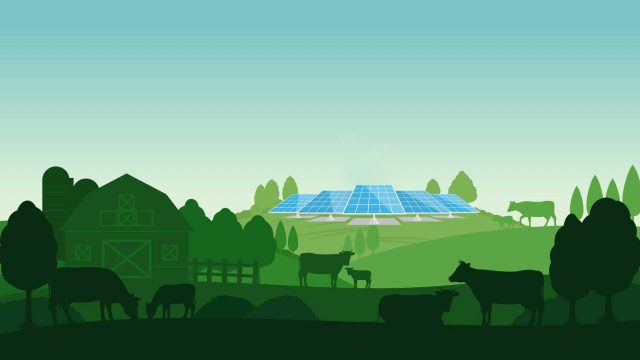 When it comes to our natural resources, there’s usually a push-and-pull between farmers and energy producers.

And there’s a reason for this tug-of-war; according to a new study, installing solar panels on less than 1% of all available farmland would generate enough energy to power the entire world. On the flip-side, farmers have a right to their entire land to plant and harvest crops.

Luckily for both, farmers are making peace with solar energy producers and utilizing the land not just for one purpose, but both.

Contrary to popular belief, solar farms perform best in cool, breezy locations, as opposed to arid deserts, which is also the prefered environment for farmland. But what’s the benefit for farmers (in addition to making money in solar energy)?  Well, new research has proven that solar panels have a remarkable influence on yield health thanks to their influence on soil moisture and micrometeorology.

The effect is so symbiotic that the US government has provided a certified guide on how farmers can get the best of both worlds.

On the state front, Michigan is increasing its farm-to-solar outreach with a recent decision to allow land currently enrolled in MDARD’s Farmland and Open Space Preservation Program to be used for commercial solar energy production.

“By preparing for and investing in renewable energy, we’re protecting our environment while diversifying revenue options for Michigan farmers and supporting economic development and job creation in a key Michigan industry,” said Whitmer.

Energy and agriculture have never been friendlier than they are today, and with the advent of this new scientific research, farmers from coast to coast are preparing to harvest as much food as energy for the sun.